Many avid fans of fantasy novels by authors like J.R.R. Tolkien find themselves seeking out how translate English into Elvish. If you listen to some more enthusiastic fans, you might wonder whether or not they are talking about a real language. Elvish is obviously purely fictional, but it is based off a very long history and composed of a variety of dialects.

The Evolution of the Elvish Language

It doesn't make much sense to use an online Elvish translator unless you understand the foundation of the language.

Author J.R.R. Tolkien was not only an author but also a poet, professor of English language and literature, and a philologist. Philologists have a great love for language, studying history, language and works of literature. He also worked as a code breaker during World War II. Tolkien used this eclectic background to create the languages in his fantasy novels, based on influences from Celtic, Welsh, Latin, German, Greek, Finnish and even some Asian languages.

There are several websites that can assist you in learning and translating the Elvish language. Some contain words and other have full common phrases, location names and even insults. Other sites contain information on how to pronounce Elvish speech, which can seem daunting at first glance. 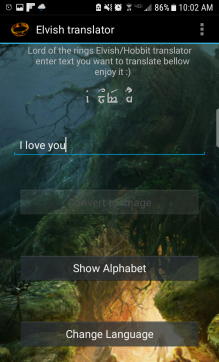 Several mobile apps are available to download that will translate words and phrases into Elvish.

To get you started, here are several common English words and phrases translated into Elvish.

Getting Started with Elvish Translations

The best way to get started is to review the sites above and find the translator or course that works best for you. You should focus on either the Quenya or Sindarin language to start and learn the grammar rules. With some study and persistence, you'll be translating Elvish in no time!