Using a virtual private network (VPN) server can allow Internet users to access websites and online resources anonymously, in a safer and more secure fashion than with a traditional connection. VPN servers can be used not only on regular desktop and laptop computers, but also on mobile devices like tablets and smartphones, as well as other Internet-connected devices.

What Does a VPN Server Do?

When a device normally connects to the Internet, it is making a mostly direct connection with the destination website or online service. Through this process, an abundance of data may be logged by both the Internet service provider (ISP) and the website. Much of this is gleaned by the IP address or Internet Protocol address, which can identify your physical location, your ISP and more. The websites you visit and the services you use may also be recorded.

A VPN server provides is greater anonymity and Internet privacy. By using a VPN, you are effectively bypassing the traffic routing of the ISP, because all Internet activity is routed first through the VPN. The ISP becomes unaware of a user's web activities.

From the destination website's perspective, this also makes it appear as if the user is accessing the Internet from the VPN server and not from his or her actual location. In other words, if your actual IP address is 1.2.3.4 and the VPN's IP address is 5.6.7.8, then the website will see you as being located at 5.6.7.8.

How Does it Work? 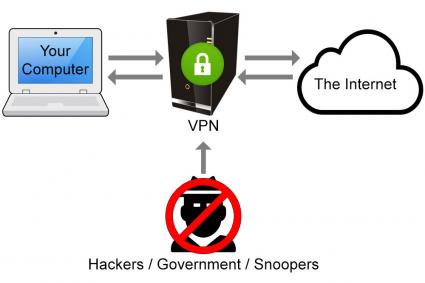 The connection between the user and the VPN server is fully encrypted, meaning all data that passes through in either direction is converted into a secret code. Should this data be intercepted by a third party, it would be unintelligible without first decrypting it. Contrast this to a standard, unsecure Internet connection where data can be much more easily spied upon.

Some companies may set up their own on-site VPN server. This is not for accessing the world wide web, per se, but rather to allow employees to access the company intranet remotely.

Network administrators at an office may configure the internal network such that it can only be accessed when a computer is at the same site. This is typically for security reasons. By establishing a VPN, employees can connect to the network by making it appear as if they were physically at the office.

Reasons to Use a VPN

There are many reasons why someone may want to make use of a VPN server.

Using a VPN offers many key benefits and advantages.

Despite its appeal, a VPN server may not be for everyone.

A Safer Way to Surf the Web

In an age where online privacy and security concerns are steadily on the rise, a VPN server can provide the added layer of protection that many consumers may desire. The ability to browse the Internet as if you were in a different part of the country or a different part of the world certainly has its appeal too, unlocking a wealth of content that may not otherwise be accessible. VPNs may not be for everyone, but they can be an invaluable tool to those who want it.

2
Comments
© 2006-2020 LoveToKnow, Corp., except where otherwise noted. All Rights Reserved.
Resouces, Advice & Tips for Covid-19
Read More
What Is a VPN Server and Why Do You Need One?